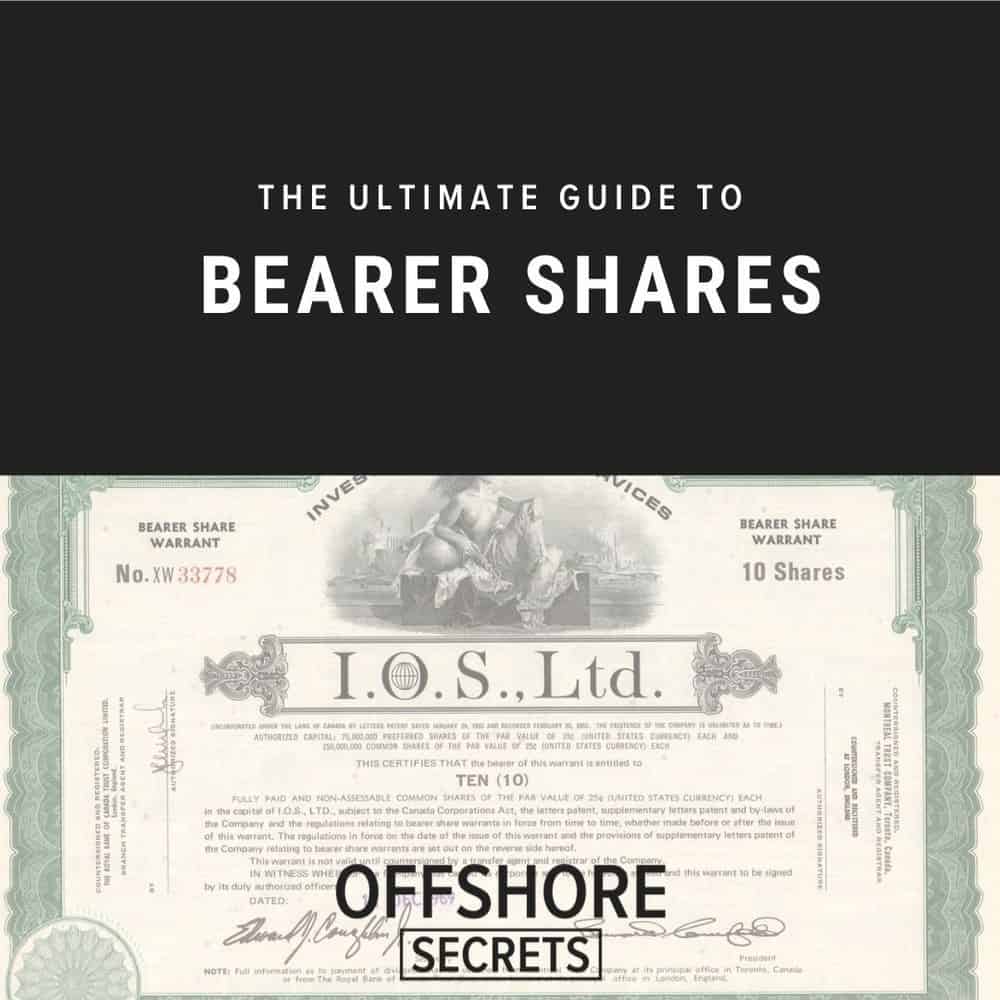 What are Bearer Shares?

A bearer share is an equity security wholly owned by whoever holds the physical stock certificate, thus the name “bearer” share.

In the case of a bearer share, whoever holds the physical stock certificate also owns the corresponding equity security (the share in the company).  The shares are unregistered,  and their owners don’t appear in any public registry.

The only way of identifying the owners is through the ownership certificates, i.e. by the physical possession of the bearer shares, which are nothing more than a piece of paper.

While there may be legitimate reasons for wanting to maintain anonymity when investing in a company, bearer shares do have a history of enabling everything from tax evasion, to terror financing and money laundering.

While they used to be very common in the offshore world of the past, in today’s age of transparency, terrorism prevention and global efforts to create worldwide tax systems they are virtually non-existent.

The Benefits of Bearer Shares

There are two main reasons bearer shares where a popular instrument in the past, and probably would continue to be today.

The primary reason bearer shares were used is privacy. Because there is no public registry of the company, it can’t be determined who actually owns it.

Bearer shares make it very easy to transfer ownership. There are no contracts to be signed, and no registry entries to be updated. Just hand over the paper document to the new owner, and the transfer is done.

The main proponent for the abolishment or modification of bearer shares has certainly been the OECD (Organisation for Economic Co-operation and Development). It has been pressuring countries for over two decades to strengthen beneficial ownership transparency.

One of the primary attributes of bearer shares is their mobility. Nobody knows who owns them, or where they are located. They could be in a Swiss deposit box, stored in an attic, or hidden underneath a mattress.

One of the actions taken against them is to mandate that they be stored in a specific place, and that place is to be recorded in a public registry.

This is called “Immobilization”.

The other way by which countries have dealt with bearer shares, is by totally eliminating them. All bearer shares in circulation have to be replaced by registered shares until a certain date.

These efforts led to many of the remaining countries changing their handling of bearer shares in the last 5 years.

Panama chose to deal with the issue of bearer shares through immobilization.

The National Assembly of Panama passed Law 47 in August of 2013, adopting a system for custodial care of bearer shares. The law went into effect on August 6, 2015.

The law gave Panama bearer share certificate holders a three year timewindow to bring their shares to an authorized custodian who will hold on to them.

The custodian has to be either a Panamana lawyer or law firm, a licensed bank,  a Panama fiduciary or a brokerage house licensed by the Superintendant of the Panama Securities Market. When submitting their bearer shares to an authorized custodian, owners must also submit a sworn declaration,  providing the identity information of the valid owner, along with the name of the resident agent.

In the case of investigations into terror financing, money laundering or other illegal activities under Panamanian law, the custodian has to provide this declaration to the authorities.

So while bearer shares in Panama have lost their mobility and therefore one of the primary attributes that made them unique, for the moment shareholders of Panama corporations will remain private, as their names never appear in a public registry.

Luxembourg chose to deal with the issue of bearer shares through immobilization.

A new law regarding the immobilization of bearer securities came into effect on April 17th 2014.

Bearer shares now need to be deposited with a professional depository in Luxembourg.

Companies must designate a custodian within 18 months of August 2014.

The UK chose to deal with the issue of bearer shares through elimination.

Bearer share holders must convert their shares into registered shares, within one month of the above date.

Bearer shares that have not been surrendered and exchanged by December 26th 2015 can no longer be transferred and they will cease their rights.

Companies that still have bearer shares in circulation by February 26th 2016 will have to apply to court to cancel them, and pay a fine equal to the nominal value of the shares within 14 days of cancellation.

The Marshall Islands chose to deal with the issue of bearer shares through immobilization.

On December 5th 2017 the EU’s Economic and Financial Affairs Council published an updated version of their list of non-cooperative countries for tax purposes. It included the Republic of Marshall Islands (“RMI”). As a result, new regulations were passed, in order to have the Marshall Islands removed from the list. The update to the RMI Associations Law introduces a requirement for all RMI incorporated entities to keep records of beneficial owners.