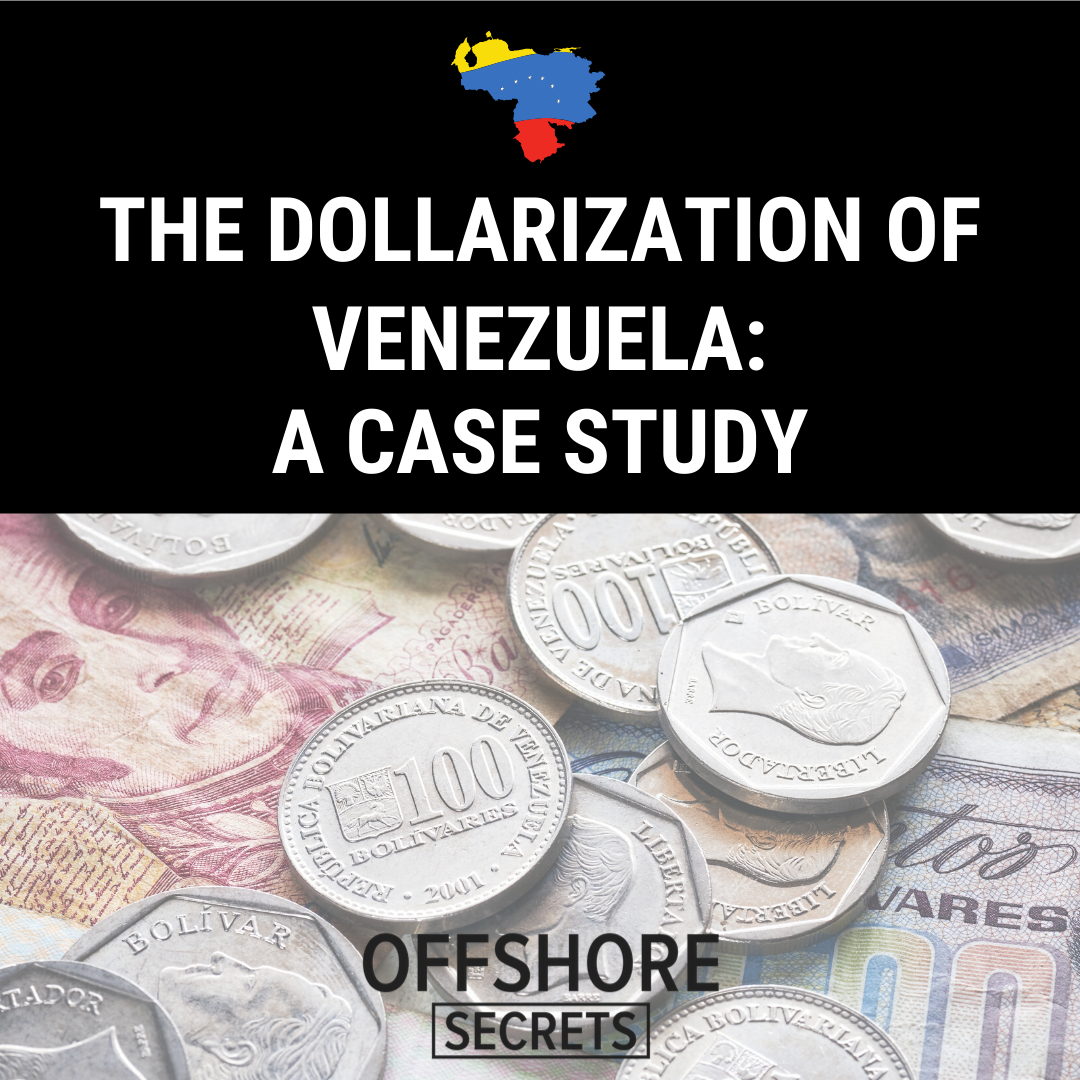 Maria is a Venezuelan entrepreneur, mentor, and international speaker. She was part of President Obama’s 2016 Young Leaders of the Americas Initiative (YLAI). Currently writes and is the senior client adviser of the Globalization Guide team.

Let’s address the ways in which Venezuela’s dollarization happened. From entrepreneurs to private companies have found to keep their economy in motion, despite its struggles and many political issues. Through the underground dollarization induced by its own citizens and stakeholders to cope with hyperinflation and control policies. This is proof of the use of digital banking and foreign banks in the South-American country.

The last 4 years in Venezuela have been especially difficult. Failures and shortages in all kinds of supplies and services became a huge problem, especially within a very unstable political situation and extremely high corruption rates. Venezuelans had to find ways to get the supplies they needed and pay for them.

The country is “dollarized” because there is more confidence in the foreign currency (dollars, euros, Colombian pesos) than in the local currency, due to its vulnerability to hyperinflation and the difficulty of obtaining bolivars in cash.

The USD is the currency preferred by many Venezuelans as a form of savings and as a payment method. In January 2020, approximately 50% of commercial transactions in Venezuela were made in dollars. There are estimates that in the border areas they could be between 60% and 75%.

In 2016 the economic scenario became dark, as the Central Bank of Venezuela (BCV) stopped publishing official figures on inflation, poverty, and national GDP. It caused intrigue and confusion among citizens and companies in the country. By then, the National Assembly’s finance committee had decided to publish its own official calculations and replace the non-transparent work of the BCV.

For 2018 the inflation rate reached a record high, reaching 1,698,488.2% by the end of that year according to figures from the National Assembly and the estimated GDP was -15%.

Currency controls are very strict, which ironically leads to the black market transactions. These transactions happen between individuals and even companies, “selling” and “purchasing” USD and EUR are the most common; allowing people to obtain VES (Bolivares) and vice versa.

There are multiple ways to know the black market rates, the main one is through websites or social media accounts like Monitor Dolar Vzla on Instagram and Dolar Today on Twitter.

The minimum wage by the moment this article was made is Bs. 450.000,00 and the average exchange rate in the black market is 187.053,78, which means that the estimated minimum wage in USD is $2,40… Yikes! 75% of the goods and services are calculated with this rate, so now you know one of the reasons Venezuela’s economy is in a generalized crisis.

Where and How Merchants Advertise Their Wares

2018 and early 2019 were marked by shortages in all commercial establishments. With the government loosening up on imports and foreign exchange trade, more and more establishments were able to sell essential products into Venezuela that the country’s companies and factories were unable to produce for the entire population. Where do Venezuelans get these supplies?

A very high percentage of these sellers accept dollars as a form of payment and set their own rate taking “monitor” pages of exchange rates as a reference. The rate will also depend on the payment method, with payment in bolivars and PayPal being the options with which the most money is lost. There are a lot of ways to pay, each seller sets their conditions and methods.

It’s a very common use platform because the commissions are low or non-existent depending on the US bank and the need to avoid the worry of cash dollar robberies, in addition to avoiding the factor of depending on the availability of banknotes to receive the change. Due to these facilities and the absence of commissions, the established prices don’t increase and the exchange rate using Zelle is the highest.

To have a Zelle account you must have a bank account in the United States, but those who don’t have it can ask an intermediary to execute the transfer.

Transactions between foreign banks are also widely used, with Bank of America being the most popular from North America and Banesco Panama from Latin America.

Many Venezuelans have a PayPal account to charge for their services or save in dollars since government policies prevented the opening of a currency account and now that it’s allowed, trust in banks and the government is very low.

The exchange rate for PayPal isn’t only one of the lowest, but whoever buys the product or service must add the cost of the commission to the price, therefore more is spent.

Unfortunately, many Venezuelans have suffered blockages in their accounts and PayPal’s support has not been completely efficient for the return of money, in addition to the impossibility of transferring that money to a bank account in dollars.

Cryptocurrencies have been one of the ways in which Venezuelans have tried to save, switching to more stable currencies based on market trends. They’re also used for changing bolivars in websites and even when only between 5% and 7% of business transactions are made with cryptocurrency, some large commercial establishments began to directly accept it, while in smaller places must first be discussed with some manager.

If the above sounded complicated, we reached one of the most difficult points. Paying in cash isn’t a simple exchange for several reasons: since the official exchange houses are very little used establishments due to the low rate established by the government, the circulation of dollars in cash depends almost exclusively on the parallel market.

Another reason is the high exigency for the condition of the banknotes. While in the United States a banknote in poor condition (as long as its security measures aren’t destroyed) is received in banks and establishments, in Venezuela they aren’t accepted for the smallest details. If they are scratched, heavily bent, or slightly broken, they are rejected or accepted at a lower rate. All businesses that accept cash dollars have one or more electronic detectors to prevent counterfeiting.

Now comes another problem: change. Low-denomination banknotes are more difficult to obtain and coins are not used, therefore buyers have few options: pay one amount in dollars and another in bolivars, pay in dollars and have the establishment deliver the change in bolivars (if they have it and if they are willing to do it), or round the account buying more products until the total is the amount that the user has to pay.

One thing is certain, after knowing the total purchase it is necessary to ask for the payment method. There is a risk that they don’t accept a certain method, the rate is very low (less bolivars, more dollars), they don’t have a change in cash in dollars or bolivars, the person in charge of accepting the payment is not there or the conditions include commissions too high.

With a severe shortage of gasoline and failures in public services, in addition to a mandatory quarantine due to the global pandemic, going shopping can be quite a difficult journey for a Venezuelan.