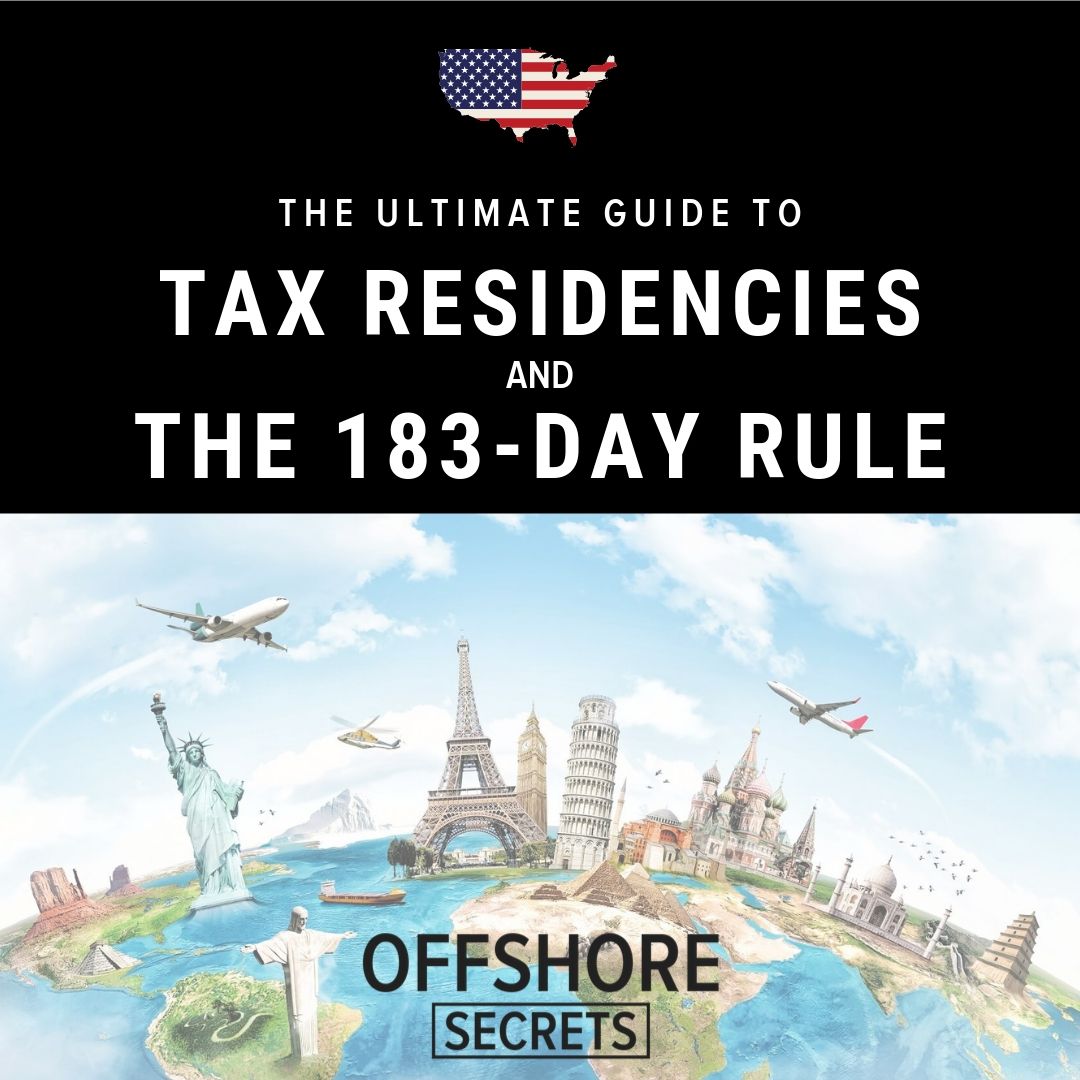 Your personal tax residency is one of the most fundamental pillars in the flag theory. The ideal choice is highly individual, and you have to consider many different factors. In this article, I will answer the most important questions regarding the concept of residence and domicile, explain the notorious 183-day rule, and give some concrete examples of how to change your residence for tax purposes.

This article is for you if:
✅ You’re open to the idea of one day leaving your home country (even for a few years)
✅ You’re running a location-independent business or are in the process of starting one (you should)
✅ You just want to be better informed about your options for the future

After you have read this article, you will know how to
⭐️ legally and ethically start saving millions on personal income tax
⭐️ avoid the critical (and costly) mistakes many people make here,
⭐️ how to drastically reduce bureaucracy

What does the word “tax residence” mean?

Your tax residence is the country, in which you are legally obligated to pay personal income tax. For the vast majority of the global population, their tax residency is identical to their home country. The country in which they were born, where they live, and where they work (their so-called ‘domicile’). And as long as the last two factors do not change, the tax residence will not chance.

“…but in this world nothing can be said to be certain, except death and taxes.”

Benjamin Franklin was a smart man, but I guess he didn’t anticipate the internet, and the possibility of perpetual traveling when he made that statement.

Then once you start to spend time in different countries, things become much more interesting. Because it is quite possible (and very feasible), to change your tax residency.

Personal income tax rates in Western countries, like Germany, Canada, Australia, New Zealand, the Nordic countries and the UK, regularly exceed 50%. Since tax residence and personal income tax are intimately connected, where you are a tax resident and pay income tax is obviously a major factor and will to a large degree determine your overall tax load.

And while being a tax resident of the mentioned countries, the local CFC rules will also prevent you from using low-tax (and low-bureaucracy) companies in offshore- or overseas jurisdictions.

Changing your tax residence away from those high-tax jurisdictions, to a jurisdiction with either a lower tax-rates or a territorial-based taxation system, is therefore a critical first step if you want to enjoy a tax-optimized, global lifestyle.

The time that someone spends in a country is one of the most important factors to determine the tax residency. The so-called 183-day rule serves as a ruler and is the most simple guideline for determining tax residency.

It basically states, that if a person spends more than half of the year (183 days) in a single country, then this person will become a tax resident of that country.

While there are many factors that can make you a tax resident quicker, spending more than six months in a country is usually the definite cut-off point to achieving tax resident status.

Some countries apply modified versions of this residency test.

While US-citizens have to declare their taxes whether or not they live in the country, the United States’ Internal Revenue Service (IRS) applies the so-called ‘Substantial presence test‘ (SPT) to determine whether an individual who is not a citizen or lawful permanent resident in the recent past qualifies as a ‘resident for tax purposes’.

The criterion of the SPT is this:

Switzerland knows about its outstanding reputation and high-quality of living. If given the opportunity, many wealthy individuals would choose to spend a significant amount of time in that country.

So Switzerland significantly reduced the amount of time it takes to become a tax resident. If you are spending more than 90 days in the country, irrespective of short interruptions, Switzerland will consider you a resident for tax purposes.

As a resident of a Western, high-tax country, moving abroad, and becoming an expat or perpetual traveler can have significant tax benefits. But before you can reap the benefits of a lower tax country, you must first convince your own government to longer regard you as a tax resident.

Following are specific guidelines for a few key countries.

The HMRC (Her Majesty’s Revenue and Customs) determines your tax status through the so-called “UK Statutory Residence Test (SRT)”.

Three sub-tests will hereby determine your tax status. We need to work through them in the exact order.

If you meet any of these conditions, you will be treated as not tax-resident in the UK:

If you meet any of these conditions, you are deemed (tax) resident in the UK:

If your residence status has not been determined through the first two tests, the HMRC now moves on to consider your connections to the UK.

The key takeaways for entrepreneurs leaving the UK:
– Get rid of any apartments or houses in your possession, that could be interpreted as “available accommodation”. Permanently rent out any rental properties you own.
– Be prepared to spend nearly complete first year after your exit outside of the UK.

How to stop being a tax resident of Canada 🇨🇦 (for Canadians)

In order to become an emigrant of Canada for tax purposes, you need to meet all of the following conditions:

Relevant secondary residential ties may include:

There are very few absolute rules here. If you need precise actionable advice, get in touch with us, and we can refer you to a tax experts familiar with the specific limits of these rules.

How to stop being a tax resident of Ireland 🇮🇪

Ireland considers three criteria, to determine an individuals tax residence status: His residence, his “ordinary residence”, and his domicile status.

Residence is determined by physical presence
An individual is considered a resident in Ireland, if he is present for more than 183 days in a calendar year, or if he spends 280 days or more in Ireland in the both the current and preceding tax year combined. Spending less than 30 days in Ireland in the current year, automatically makes you a non-resident for that year.

Ordinary residence
If you were considered a resident for three consecutive years, you become an ordinary resident. This status does not expire until three years after you’ve stopped being a tax resident in Ireland.

As an ordinary resident, you will have to keep paying taxes on your domestic and foreign income, outside a few exceptions.

How to stop being a tax resident of Australia 🇦🇺

Australia uses four different residency tests to determine if an individual is a resident for tax purposes in Australia.

You need to fail all of them, in order to no longer be considered a resident for tax purposes of Australia.

Resides test:
The primary test of tax residency is called the ‘resides test’. It takes into account your

Domicile test:
This is the one test that Australian expats most commonly struggle with.

Even if you don’t reside in Australia, you will still be considered a tax resident, UNLESS you can prove that you have a new permanent place of abode outside Australia. You must show the intent of making a new home outside the country.

Unfortunately the relevant tax ruling is quite vague what determines a permanent place of abode. So how can you demonstrate to the Australian taxation office, that you have really left the country permanently?

Australia does have an exit tax.

How to stop being a tax resident of Spain 🇪🇸

How to stop being a tax-resident of South Africa 🇿🇦

What you should do next

After you have left your country, you have two options.

In some cases like Australia, you will be almost required to choose option 2 or 3, if you actually want to get out of paying your income tax there. Just becoming a perpetual traveler is not an option.

What you need, is a bridge country. Panama with the Friendly Nations Visa, Paraguay, or Georgia is a potentially viable option. If you need specific advice, contact me for a consultation.

Do I have to consider calendar years or fiscal years?

Since the rule affects your fiscal status, the fiscal year is the one we need to consider.

But some countries have a fiscal year that is different from the calendar year. In the UK for example, the fiscal year runs from the 6th of April to the 5th of April the following year. This is also the period of time that is being considered for the 183-day rule.

How do you count the days for the 183-day rule?

There are some irregularities, how arrival and departure days are counted, and how much time you need to spend in the country for a day to count as a full day.

In many countries, arrival days count as a full day, and on the other hand departure days don’t count at all.

Sweden however counts both the departure and the arrival days as a full day spent in the country.

How many days can I spend in a country consecutively, without triggering the rule?

If you spend more than 183 days consecutively in a country, you will generally trigger the rule.

If you want to maximize your time in the country over a certain time period that involves the beginning of a new year, you will need to leave the country.

For example you could spend July to November in country, leave for (part of) December, then come back from January to May without triggering the 183-day rule for either year.

If you stayed all the way to January, you will trigger the rule, and possibly even for both years.

Is the 183-day rule universal?

Let’s take the case of immigration legislation as an example. There might be some time limits specified in immigration legislation on a local that allows for an exceptional approach. This means that it is a reflection of what the favored strategies of each country regarding free trade, attracting overseas workers, and security. Therefore, the 183-day rule may not be relevant to immigration compliance considerations. It is always a requirement to have a review of the destination country’s immigration rules which is a case-by-case basis.