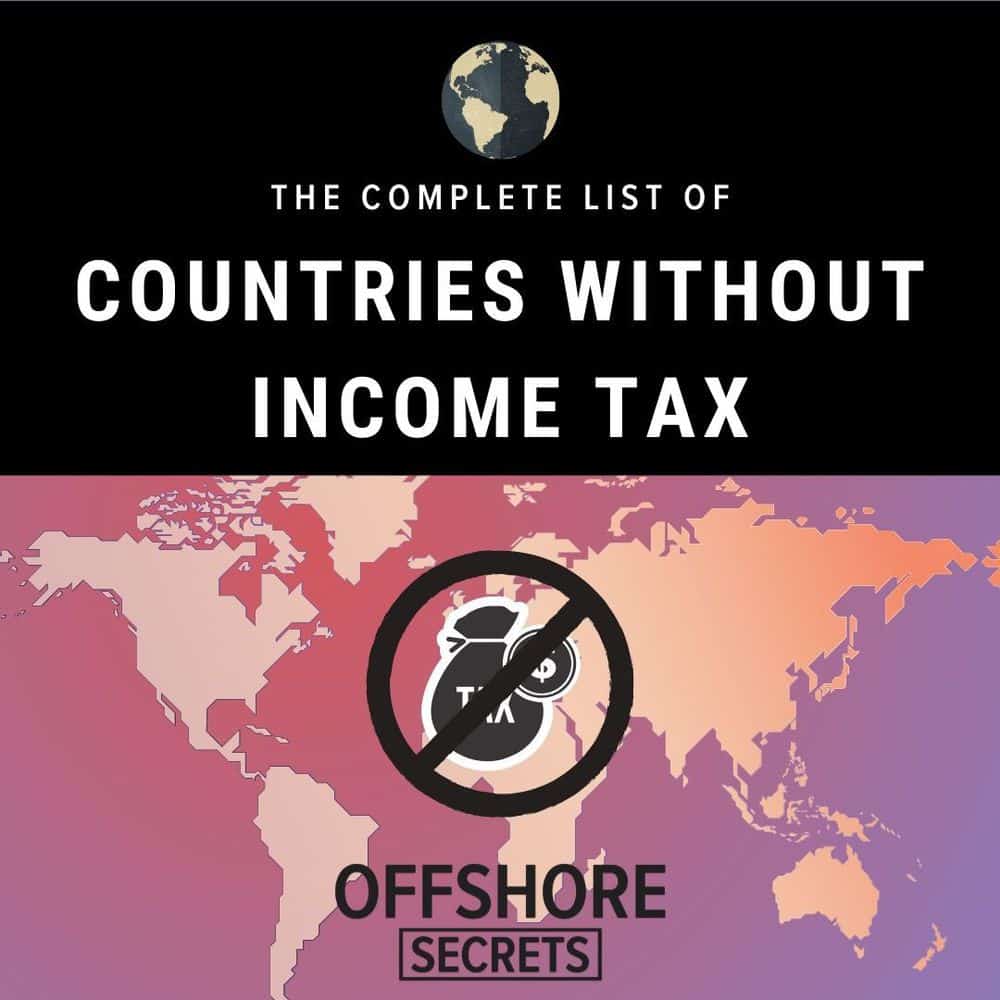 The average income tax rates in Western countries often exceed 30%. And when you add the cost of social security, in many countries a citizen will have to forfeit over 50% of his income to the state.

Chris started Globalization Guide to help entrepreneurs like himself to master the challenge of international business and living abroad. Since then he has helped hundreds of clients with their international structuring.

Now while the US taxes their citizens based on their citizenship alone, most Western countries use a residence-based taxation system.

There are generally three ways for non-US citizens to stop paying any personal income tax.

1. Live as a perpetual traveler, and avoid becoming a tax-residents in any country (see 183-day rule)
2. Live in a country with a tax-exemption on foreign income (like Panama), and earn money abroad
3. Live in a country that doesn’t charge any income tax

There are 23 countries in the world today, that do not charge their citizens or residents any income taxes at all.

In the following article, we have taken a look at those countries.

The 23 countries without income tax, from best to worst

Now what exactly makes a country good or bad is quite subjective. Which makes this ranking quite subjective. It includes relatively objective criteria like ease of immigration, prices, location, security and subjective things like culture and vibe.

On the top of our list are the Bahamas with their capital Nassau. There are no taxes on income or capital gains in the Bahamas. An annual fee (starting at $1,000) or the purchase of a property will qualify for residency.

Because of the close proximity to the United States, the Bahamas enjoy a relative wealth and high standard of living. Naturally you will see many Americans. The downside is high prices in comparison to other Caribbean islands.

You can choose from dozens of very nice beaches and find all sorts of entertainment on the islands.
There is a relatively high level of crime, but the residential areas in which foreigners reside have high security and are safe.

The islands are widely known for having the longest-running Economic Citizenship Program.

Another way to obtain citizenship is an investment in real estate. While it’s a possibility it’s subject to governmental overview. Therefore the investment often yields little return and is significantly more expensive.

The St. Kitts and Nevis passport allows for visa-free access to 130 countries. It’s therefore a very attractive option for high-wealth individuals from China, Russia, and the Middle East.

For citizens from certain countries, the permanent residency can be obtained without many challenges and at a much lower cost. The application costs just under $200. Filling out paperwork is all that is needed.

The Turks and Caicos Islands are a British overseas territory. While they used to be independent in the past, due to internal problems they are now under close control by the UK again. It’s a classic offshore destination and therefore seen as quite disreputable.

But there is a high quality of life, and it’s easy to immigrate to.

A temporary, renewable residency permit without a local work-permit is available for $1650.

St. Barts are a French overseas territory and among the most attractive playgrounds for the rich in the Caribbean. This results in a very high price level.

The islands of Wallis and Futuna in the Pacific Ocean are a so-called “Collectivité d’outre-mer” of France. Since voting for increased independance a few years ago they have been able to set their own tax-regime. Due to a lot of financial support by France, the islands themselves are tax-free.

Access for EU-citizens is very easy. Since they are officially a part of France, the EU freedom of establishment rules apply. EU citizens may therefore easily settle on the islands. For US citizens the rules are different.

The island of Vanuatu is a paradise in the Pacific Ocean. It therefore attracts many retirees and pensioners.

The ways to settle on the island include the usual options of marriage, foreign assignment and investment. But there are also options for landowners and retirees. A land purchase of $100.000 and a monthly income qualifies for the residence permit.

Bahrain is probably the most attractive Gulf state on this list, even ahead of the United Arab Emirates. This is because you can become a resident without a company assignment or getting married.

This is how to get a residence permit in Bahrain:

The British Virgin islands rival the Caymen Islands when it comes to their tax regime.

However it has become very difficult to settle there. The government only grands 25 residency permits each year. And they require a minimum of 270 days per year on the islands.

The Caymans Islands are most likely the most notorious among the tax-free Island states of the Caribbean. They have a thriving financial service industry. This makes it relatively expensive.

Apart from good beaches, the Island don’t offers a huge variety of activities. Most people therefore don’t choose to actually live there. But for those considering this option, there are possibilities.

Although the Norfolk Islands belong to Australia, they have their own immigration regulations.

There is even a possibility to obtain permanent Australian citizenship through residence here.

The Pitcairn Islands are located in the middle of the Pacific Ocean. 5000km apart from New Zealand, and 5700km from South America. This makes them the most isolated (semi-sovereign) state in the world.

The inhabitants are almost completely descendants of the survivors of the notorious “Mutiny on the Bounty”.

Pitcairn has no airport and is only reachable by ship. The total traffic to the islands amounts to 4-6 freight ships and occasional cruise ships per year.
Also lacking the beautiful nature seen on other Pacific Islands, there is not much that favors a permanent residence here.

Immigration is therefore not a problem.

The United Arab Emirates consists of several small states, of which Dubai and Abu Dhabi are the most popular. The Emirates are known for their megaprojects, oil wealth and high quality of life.

Despite its tourist profile, the country doesn’t have much to offer for permanent immigrants. International assignments by companies to Dubai or Abu Dhabi are valid possibilities. Other than that the options are limited and require a lot of capital for potential investors.

Nauru is one of the smallest states in the world, and once used to be THE wealthiest state. Today Nauru is mostly in the news for being a refugee camp for illegal immigrants trying to enter Australia.

Up until a few years ago Nauru offered an attractive Economic Citizenship Program to acquire a second citizenship. While this has now been closed due to pressure by the United States, tax-exemption still exists on Nauru. Life on Nauru with its environmental problems due to Phosphate mining in the past is not very enjoyable however.

Monaco is well known for being a playground and tax-haven for the super rich inside Europe. It sports one of the most impressive marinas in the world, exclusive casinos and a formula one track right through the city, which is not much bigger than the Vatican.

Prices are high. A small studio apartment in the worst location costs around 2000$. Prices in general are around triple of those in the nearby french Riviera, where they are high already. Residency permits are practically only affordable for millionaires however, who can also handle the high prices in the city.

In order to obtain a residence permit, 500.000€ have to be invested in real-estate and another 500.000€ be deposited on a Monegasque bank. Additionally an individual interview and a minimum stay of 6 months per year are also required.

While the Maldives are not cheap, it’s reasonable easy to reach them as a tourist.

Living permanently in this muslim country is much more complicated however. Besides marriage, really the only other viable option is to find a job in the tourist industry in the big 5-star resorts.

Oman is similar to the other Gulf States. The easiest way to stay here is as an employee for an international company. There is an investment visa program as well, but the investment amount is very high.

Another tax-free Gulf state. Once again it is very difficult to settle in this oil-rich country. You need to be sent by a company.

Being a well-known tax-haven for the super rich, Bermuda is one of the most expensive countries in the world. A one bedroom apartment costs around $2,500 USD/month, 2- and 3-bedroom cost $3,500 and $5,500 respectivley. If you want ocean view, a pool and a garden you can expect to pay upwards of $15,000 per months. Almost all other prices are about 3x that of the US and Canada.

Three options are on the menu to get the permenent residence:

Negative: Very difficult to obtain permanent residence permit, aside from marriage and employment by international companies

The small sovereign state on the island of Borneo owes it’s status as one of the richest countries in the world per capita to it’s oil reserves. But since it’s nearly impossible to secure a residence permit, we needn’t consern us much further.

While the Vatican City can definitely score points for location, being situated in the city of Rome, living here will stay a dream for most people. Only high members of the catholic church and members of the Swiss Guard will ever have a chance to become residents of the smallest state in Europe.

Wether or not the Western Sahara should even be on the list as a separate country isn’t clear. The disputed territory on the north west coast and in the Maghreb region of North and West Africa is partially occupied by Marocco and partially controlled by the self-proclaimed Sahrawi Arab Democratic Republic. A lack of a solid governmental structure will enable a tax-free life, if you can make sure you stay alive.

Somalia is the prime example of a failed state. While it is possible to enter Somalia as a tourist, you are required to pay for armed guards, if you wan to explore the country. Not the ideal location to set up your new home.

As you can see, there are still a number of countries without income taxes in the world. However it is not wise to choose a country based on this metric alone, and most countries that have a standard of living that is worth exploring, also charge their residents taxes.